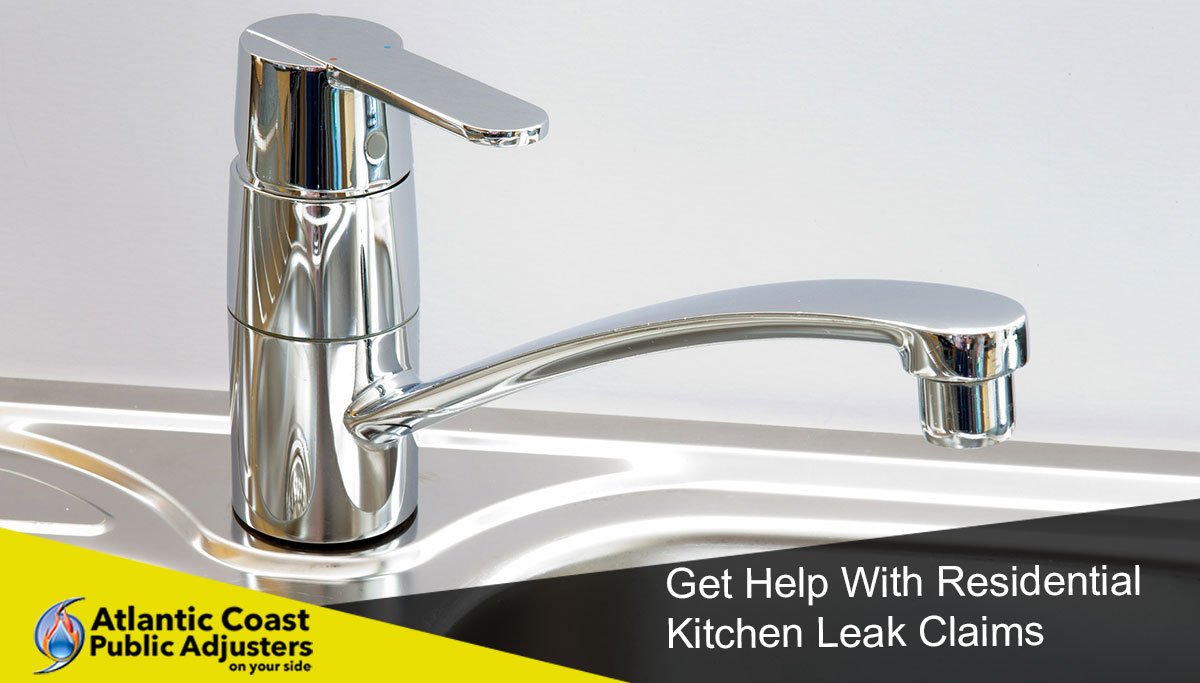 A water leak in your kitchen can range from an annoying dripping faucet to enormous damage from a burst pipe. If the damage is severe enough to claim on insurance, it’s best to call in a professional public adjuster who can assist you in getting the best payout for kitchen leak claims.

Where Is the Water Coming From?

Before you call in a plumber to identify the source of a puddle on your kitchen floor, you may attempt to pinpoint the cause yourself.

Water flows in the direction of least resistance, so the wet patch under your feet at the sink may actually be coming from your refrigerator or dishwasher. It may be more serious than that, e.g., a burst pipe in your ceiling or wall. That is definitely a job for the professionals, and good cause from a claim on your insurance. Kitchen leaks can be insidious and cause enormous damage especially if they occur in places you don’t often look. You may only notice there’s a problem behind your fridge if you see or smell mold on the walls.

The leak has been identified and it’s worse than you feared; there is a pinhole puncture in a pipe in the wall which has been slowly seeping water for weeks. You thought the damp in the cupboards was from that dripping faucet that needs the washer replaced. But the pressure from the major leak has been building up and has finally found a way through and has now warped the back wall under the sink and mold has flourished everywhere. You’ve called your insurance company and the assessor has scrutinized the damage. They agree there are grounds for a kitchen leak claim, but you feel they don’t have your best interests at heart.

Now is the time to call in a public adjuster.

They will scrutinize the claim and the insurer’s offer, and ensure that you are getting a fair deal. You could bypass the insurance company and go directly to the adjuster, who will assist you with assessment of the damage and show you how to lay a claim. A public adjuster works with the client’s concerns in mind as opposed to an insurer who naturally wants to limit any claim to the least possible payout.

How To Prevent Future Leaks?

You’ve experienced the inconvenience that a kitchen leak can cause and you don’t want to repeat the process.

So what preventative measures should you take?

Water damage can be extensive and expensive. You may have to replace your fixtures as well as the contents of your kitchen cupboards. You will not be able to eat food that is water logged as it may be a health hazard. Wet electrical connections could be dangerous and any appliances that were plugged in should be checked for damage.

Unless you have extensive DIY experience, it is best to call in the professionals to assess any damage and get help with residential water leak claims. Even if you have already submitted a claim and been paid out, a competent public adjuster can review this and negotiate a fair settlement. Any principled company such as Atlantic Coast Public Adjusters will not charge you a fee until the claim has been resolved. Do you need help filing a kitchen leak claim? Call Atlantic Coast Public Adjusters today at (877) 561-2524.

PREV | NEXT
Recent Posts
Categories
Archives
x
What are you looking for?