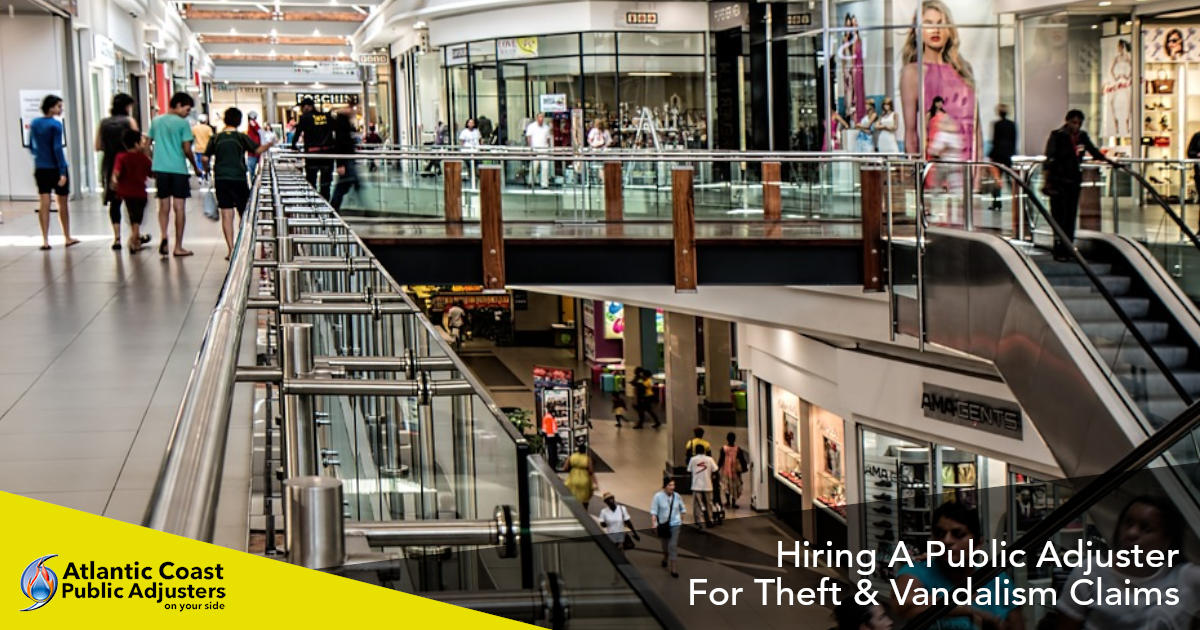 Despite property owners’ best efforts to prevent theft and vandalism from occurring, there are times when unsolicited borrowers slip past.

Although the majority of strategies in adjusting theft and vandalism claims are similar to those of other losses, there are several key aspects that set these claims apart, making them complicated and time consuming. At Atlantic Coast Public Adjusters, we believe it is important for you to understand what these aspects are, and to know exactly how a public adjuster will manage your theft and vandalism claim.

Theft and vandalism claims are a specific type of residential claim and are some of the most intricate types of cases to resolve.

Theft is when your belongings are wrongfully removed from your residence or business.

Vandalism can include any of the following:

Both theft and vandalism are stressful enough to deal with as is, which makes navigating insurance paperwork all the more painful.

Most insurance companies are notorious for providing low-ball estimates for property that was been stolen or vandalized. They look for estimates from companies with large buying power and employ adjusters that have their interests in mind. Atlantic Coast Public Adjusters are on your side and will work to maximize and speed up your recovery.

Most theft and vandalism cases rest heavily on official police reports which document the event. Insurance companies will use these reports to verify the event happened and help them in any future subrogation avenues.

Here, we discuss in a little more detail exactly what public adjusters do and how they can help you with theft and damage claims to your residential, commercial, or marine properties.

What Is A Public Adjuster?

A public adjuster is an independent and licensed insurance expert, hired by policyholders for assistance in settling insurance claims on his or her behalf. Insurance companies will provide an adjuster for you, and they will assess any damage and work out what should be paid to you. Insurance adjusters are provided at no cost, but since they work for the insurance company, they most likely will not have your best interest at heart.

What Does A Public Adjuster Do?

Public adjusters aim to ensure insurance companies pay you what you deserve, ensuring you file a legitimate claim without any mistakes that could cost you in the long run. They are experts that work for you, and not the insurance company.

Their main influence is in navigating complex, and often tedious, forms with you, and helping you fill out the correct paperwork.

The main reason theft and vandalism claims are so complex is the large number of file claims for false incidents – people claiming items have been stolen which were not owned in the first place. Insurance companies have strengthened their security by making the claim filing process much stricter than it used to be.

If you are unable to provide ownership documentation; in larger loss cases, the majority of insurance companies invoke their right to an examination of the policyholder under oath. They might also ask for financial documentation from the policyholder, such as tax returns, in order to build a basis of ownership. They will need to have support showing the policyholder had the income and lifestyle for any large items claim stolen.

Why Should I Hire A Public Adjuster?

Most policyholders do not hire public adjusters because their insurance company provides an adjuster at no cost. They also may not realize that these services are available to them.

Hiring a public adjuster has many benefits, including:

If you do decide to hire a public adjuster, try involving them in the process as early as you can. They will then be able to speak to the insurance adjuster through the initial process.You wouldn’t go to court without an attorney – don’t try to settle your insurance claim without an adjuster from Atlantic Coast Public Adjusters. Contact us today for a free assessment.

PREV | NEXT
Recent Posts
Categories
Archives
x
What are you looking for?